Brunello di Montalcino is a famous denomination for DOCG in the Italian region of Tuscany. It has been at the forefront of mandating rules of viticulture and winemaking for the more than 250 growers and producers from the hills surrounding the town of Montalcino, which resides in the province of Siena.

Brunello di Montalcino is mutually recognised as one of the finest expressions of “Made in Italy” across the world.

A Taste of Brunello di Montalcino 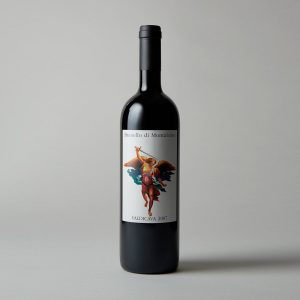 There are records of a red wine from the Montalcino area called “Brunello” dating back to the 14th century, but it was 500 years later that the legacy truly began to take shape.

In the 19th century, the pharmacist Clemente Santi took great interest in agriculture and planted selected vines of the Sangiovese Grosso grape. His idea was to experiment with new methods of vinification in order to produce a wine made from Sangiovese only, one that was suitable for ageing.

His grandson, Ferruccio Biondi Santi, took over the estate and set extremely strict standards of quality, such as prolonging skin contact for the wines to obtain deeper flavours, richer tannins and higher acidity. In 1888, the very first modern version of Brunello di Montalcino was produced. The great insight of Ferruccio, who was also a veteran soldier that fought under Garibaldi in the wars that lead to Italian unification, was to observe Sangiovese resisted better than other grapes to the phylloxera fungus and to focus on the grape while other varieties were being wiped out across the world.

In 1995, the first vineyards from the 60’s in the area surrounding Montalcino were replanted and, in 2006, Wine Spectator elected Brunello di Montalcino “Top wine of the year”.

Today there are about 250 producers in the denomination, contributing to a brand that is valued at almost a billion Euros per year and attracting numerous investments from VIPs buying estates in the area. Brunello estates are owned by the coffee family of Illy and the fashion designer Massimo Ferragamo.

Montalcino has a rather unique micro-climate within the Mediterranean Tuscany. In fact, it is one of the warmest and driest climates in the region, with annual rainfall of just 700 mm. This allows the grapes to ripen up to a week earlier than is the case in other parts of the region.

Sangiovese planted on north facing slopes receives less sunlight, hence it ripens more slowly and produces more aromatic wines. When facing the south, the higher winds bring more complexity and power, as the grapes tend to have a deeper ripening.

The top producers in Montalcino often offer blends from both north and south facing slopes.

The 250 estates allowed to make Brunello di Montalcino DOCG produce about 6.5 million bottles per year, with 65% of these are exported, confirming Brunello as the best-selling Italian fine wine and a flagship for Tuscany and Italy throughout the world.

It is particularly popular in the United States, which buy 25% of the whole export, mainly to serve high-end restaurants.

Turnover around the Brunello di Montalcino brand is estimated to be around a billion Euros.

DOCG mandates that the only grape allowed to be used for Brunello is Sangiovese. The name “Brunello”, which translates as literally “Little Brown”, comes from the brownish colour that the Sangiovese Grosso grape, planted by Camillo Santi, displayed before harvest.

In 2008, an investigation of wines that were allegedly made from grapes other than Sangiovese, was famously named “Brunellopoli”. The U.S. government subsequently blocked all imports unable to prove that they were 100% Sangiovese.

It was Ferruccio Biondi Santi that introduced the severe rules for winemaking in Montalcino.

The most famous of which relates to the single grape used in its production, Sangiovese. Ferruccio also introduced an extended maceration period, where contact with the grapes skin brings colour and flavours to the wine.

“Botte” is Italian for barrel, and the “Botte” used in the making of Brunello are, typically, large Slavonian oaks that transfer little flavour. Some producers have recently taken to using smaller, French oaks, resulting in these wines displaying hints of vanilla oak. It’s not uncommon to have wines fermented for a short time in small barrels before being transferred to bigger ones for a longer period.

A normal bottle is released on the market 50 months after harvest, while “Riserva” are released 12 months later. Ageing requirements dictate that Brunello wines should stay in oak for 2 years and spend at least 4 months in the bottle before release.

Intentional infringement is punished with conviction of commercial fraud, with up to six years jail time.

Generally speaking, Brunello di Montalcino displays a fleshy texture that is ripe and fruit driven in character. It has rich aromas and flavours such as blackberry, black cherry, black raspberry, chocolate, leather and violets.

Tannins are smooth and acidity tends to be high, so the wine goes better with food, especially grilled meat or game, rather than being consumed independently. Brunello also ages well, with some vintages maintaining an astonishing quality after several decades in the bottle.

It would be impossible not to mention Biondi Santi family when talking about Brunello di Montalcino. For almost 100 years, they were the only producers of the wine and their estate “Il Greppo,” where Clemente Santi planted the first vine, has been defined the first Italian “grand cru”.

Valdicava means literally “valley of Cava” and the estate is located in a valley in the north side of Montalcino, in an area called Montosoli. The estate was founded by Bramante Martini in 1953, when he decided to take the opportunity of returning to the property where his ancestors, centuries earlier, used to be sharecroppers. It is recognised worldwide as one of the finest representatives of Italian winemaking.