Planeta is a large Italian estate that specialises in winemaking. It is located in Sicily and  spreads across six different sites within the island.

Planeta is owned by the eponymous family, with the two generations of fifteen cousins and seven children working alongside each other in the business.

A Taste of Planeta 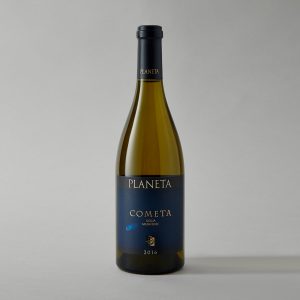 Planeta’s first vineyard was officially planted only in 1985, however, that was only the latest agricultural project of a family that has over five centuries of history in Sicily, spanning seventeen generations. In fact, in the 1900s, Vito Planeta and his grandson Diego expanded the business, founding the co-operative Settesoli, which still runs today, representing the largest company in the Sicilian wine industry.

The Planeta family has always distinguished themselves for an approach that combines tradition and innovation, hence the project of growing their own grapes and how the beginnings of the winery was welcomed with enthusiasm by the young generation, including cousins Francesca, Alessio and Santi. Youth, in this case, has been key to their dynamic approach, all helped by the experience of uncle Diego. The rest of the family is also still very much involved, with seven children and fifteen cousins having an input.

The first plantation of vines took place in Ulmo, in 1985, over an area of 50 hectares, although the inaugural harvest didn’t happen until ten years later. Over the years, Planeta expanded the vineyard’s possession across several various terroirs in Sicily: 1996 in Gurra, 1997 in Vittoria, 2008 around the volcanic area of Etna and in 2011 at Capo Milazzo. With the development of the vineyards, the family developed the wineries over the next several years.

The vineyard and winery in Ulmo still represent the jewel of the crown for Planeta, with the estate dating back centuries. It continues to feature ancient olive groves, used for the production and commercialisation of oil, and the ruins of an Arab castle alongside the vineyards. Ulmo also produces Chardonnay, which is widely thought to be Planeta’s flagship wine, and the benchmark for Italian white wines in general.

Planeta’s crowning moment came in 1999, when it won the Italian Winery of the Year award, and has grown stronger ever since, consistently being featured in the most important industry publications in Italy, such as Gambero Rosso and Veronelli.

During harvest time, Planeta promotes an initiative whereby Italian and international artist travel with the family throughout Sicily. This culminates in the Ulmo estate being used as a studio for a local exhibition, accompanied by an annual publication.

Planeta is a very large estate, counting an impressive 390 hectares of vines spread across six different sites in Sicily.

The estate has been experimenting with different grape varieties for years, hence the portfolio is quite fragmented. Nero d’Avola is the most represented variety with 15% of the total, with Syrah and Chardonnay following at 10% and Frappato and Merlot at 7%. Very small amounts of several other grapes can also be found there.

The turnover of the company in 2016 was estimated to have reached 15 million Euros.

The most significant winemaker at Planeta was undoubtably Carlo Corino, an enologist from Piedmont who sadly passed away in 2007. At the first Planeta winery in Ulmo, he promoted experiments with micro-vinification, techniques based on the usage of barrels for winemaking.

The grape portfolio of the estate includes both international and Sicilian indigenous varieties. This was the specific instruction of uncle Diego, who was convinced that local grapes are not suitable for ageing. Carlo Corino’s role was key in combining the characteristic of international grape varieties and the unique soil and terroir offered by the Sicilian landscape.

While Chardonnay is still considered the flagship of the estate, Nero d’Avola and Frappato’s production are quickly becoming more prominent in Planeta’s portfolio.

A very common word in Planeta’s viticulture and winemaking is “sustainability”. There is a culture of combining ambition and evolution of oenological practices with a sensitive approach to preserving the eco-system that the winery operates in. For this reason, a great deal of attention is given to bio-architecture and renewable energy, with 300 square metres of photovoltaic panels providing energy to the wineries in Menfi. Extensive usage of wooden materials for the boilers and a keen approach to usage of recycled material are also employed.

Planeta’s style has evolved from rich, full-bodied wines to more elegant examples, while not losing their richness or intensity. Particularly fruity and intense, spicy notes are not uncommon.

The Beauty & The Taste has selected for you the 2016 Planeta Cometa, made entirely from the Italian grape variety Fiano.