Yves Cuilleron, a third generation wine maker, is the owner of Cave Yves Cuilleron in the Northern Rhone region in France.

The estate is a real family affair and Cuilleron’s passion is evident in the production of his masterful and well-respected wines.

A Taste of Domaine Yves Cuilleron 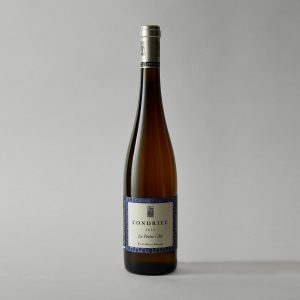 Yves Cuilleron’s estate in the Northern Rhone is the epitome of a family owned vineyard. While his passion was not always wine and viticulture, he came back to his roots and found a way to represent both sides of his family in the way the estate was run.

Cuilleron’s estate has been in his family since 1920, when it was purchased by his paternal grandfather, who sold his first bottles in 1947. In 1960, Yves’ uncle, Antoine Cuilleron, took over the estate.

Yves Cuilleron initially intended to be a mechanic instead of following in his family’s footsteps with wine production. He did his military service in Alsace and attributes his renewed interest in wine to tastings and restaurants he would go to with his friends in the region. When his uncle Antoine retired, Cuilleron’s family was considering selling the estate. However, Yves stepped up and took over the estate in 1987.

Since acquiring the vineyard, Cuilleron has worked to extend its holdings and advance its reputation. Through his efforts, the estate now owns land in the Condrieu, Saint Joseph, Cote Rotie, Crozes-Hermitage, Cornas, and Saint-Peray appellations, with the key wines coming from Cote Rotie and Condrieu. Cuilleron has also teamed up with Californian wine producer Jeff Cohn, where the benefits of California’s climate are combined with Yves’ skill in wine making.

Yves Cuilleron’s ambition has served the estate well over the past 30 years, as well as his determination to produce the best quality wines he can.

In 1987, when Yves took over the estate, it covered just 3.5 hectares of vines. Since then it has expanded to around 75 hectares across different appellations. 8 hectares are located in Cote-Rotie, 12 hectares in Condrieu, 27 hectares in Saint-Joseph (7 of which are dedicated to white wine grapes and 20 to red wine grapes), 4 hectares in Crozes-Hermitage (1 for white, and 3 for red), as well as 3 hectares in Saint-Peray, and 1.5 in Cornas.

The estate produces about 430,000 bottles of wine annually, divided between Saint-Joseph, Cote Rotie and Condrieu. 24% of Cuilleron’s wines are from Condrieu, 21% from Saint-Joseph, 20% from Cote Rotie, 5% from Crozes-Hermitage and another 5% from Saint-Peray.

Vines on the estate date back to around 1939, with some being as young as the 1990s. No insecticides are used, only small amounts of organic fertiliser, allowing the terroir to come through in the flavour of the grapes. The property in Cote Rotie is situated on gneiss and schist soils, with granite and alluvium in Condrieu and Saint-Joseph.

All of the grapes are harvested by hand and meticulously sorted before being aged in oak barrels with wild yeasts. Each wine is aged in accordance to its appellation. White wines are aged for 9 months on the lees and are lightly filtered before being bottled. Red wines are partially destemmed, aged for 18 months, unfiltered and fined with egg white.

The estate does not use enzymes in their wine production and sulphiting is used in a sensible way.

Yves Cuilleron places a lot of importance on traditional and sustainable aspects of winemaking, all the while aiming to keep his signature style.

Cuilleron’s wines typically bear his specialty; they bear the hallmarks of their terroir while also keeping Cuilleron’s distinctive character. His adherence to the traditional ways of wine production, while not being afraid to move forward, creates wines that are unmistakably his own.

For you we have chosen the 2012 Cave Yves Cuilleron Condrieu La Petite Cote.