A Taste of Chateauneuf-du-Pape 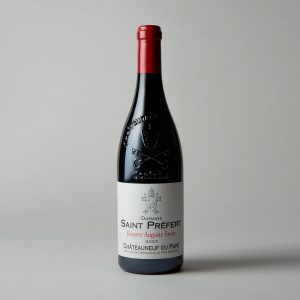 The first record of wine production in Chateauneuf-du-Pape is in the 1300s during the Avignon papacy. It is certain that people had been producing wine in this area before that, however, but little is known about it. In 1308, French Pope Clement V refused to move to Rome and instead moved the seat of the papacy to Avignon. For the next seventy years popes resided in the area during which time they worked to promote Burgundy wines and support the viticulture of the area.

Also during this era, the Catholic Church had a large hand in wine production in general, mainly because wine had taken on a religious significance due to its use in the Catholic mass. Wine was produced by monks, so it’s not inconceivable that the Avignon popes also had a hand in spreading the reputation of the region’s produce. However, once the papacy moved back to Rome in 1378, what had become a booming wine region, with 45% of the land in Chateauneuf-du-Pape dedicated to grape growing, declined significantly.

In the 1700s, Chateauneuf-du-Pape had gained a reputation for the quality of its wines and, in the early 1800s, some of the producers in the area that are still around today were being formed and praised for the quality of their wines.

Growers in the area are incredibly protective of their vines and in 1954 they passed a regulation that banned overhead flying, taking off and the landing of aircraft in the commune, in case the vines were damaged.

Despite the hardship that has been faced by the area over its long history, Chateauneuf-du-Pape recovered fully and became a leader within the wine industry, producing some of the finest, most limited wines in the world.

Chateauneuf-du-Pape has a humid, subtropical Mediterranean climate, and receives a moderate amount of rainfall throughout the year. It can be extremely dry in summer, but part of the area’s AOC says that irrigation and watering of the vines is forbidden during the growing season. If the need is very great, growers must ask permission from the French government to water their vines.

The soil in the area is pebbly and sandy and is made up of quartz stones and red clay. The stones in the soil retain heat from the day, which they then release during the night, helping the grapes to ripen more quickly during the growing season.

Around 3,100 hectares around Chateauneuf-du-Pape are under vines and the area produces about 13.5 million bottles of wine per year, only 1% of which are white wines. Rose wines are not considered to be Chateauneuf-du-Pape under its appellation, so the area is almost strictly a red wine region.

There are thirteen different grapes grown in the area, which include Grenache, Syrah, Mourvedre, Cinsault, Muscardin, Cournoise, and Clairette.

Grenache grapes were grown on 74% of the growing surface in the area as of 2004.

Because the primary grape in the region, Grenache, oxidises easily in wooden barrels, it is produced in large cement tanks. Other red wine varieties in the area are produced in large oak barrels, which, in comparison to small oak barrels, don’t impart the same oaky flavours that some might expect from high end red wines.

Low yield is critical to Chateauneuf-du-Pape wines, helping to maintain the exclusivity and flavour of the produce. Grape varieties grown here tend to produce thinner wines when grown in large quantities.

Chateauneuf-du-Pape wines have vanilla, red fruit and cinnamon aromas, with flavours of smoke, leather, red berries and thyme. The reds produced here are known for being full-bodied, moderately high acidity and of slightly higher alcohol content, at 14% ABV.

The most famous producer in Chateauneuf-du-Pape is La Crau, which is run by the Brunier family. La Crau produces the famous Vieux Telegraphe and Telegramme, which are two of the finest wines in the entire region.