Ulysse Collin is a very young winery, having only been founded in 2003 by Olivier Collin in Congy, France, which is part of the Champagne region.

In the short amount of time that Collin has been operating, he has already made a name for himself, both through the techniques he uses to produce his wines, as well as the wines themselves.

A Taste of Domaine Ulysse Collin 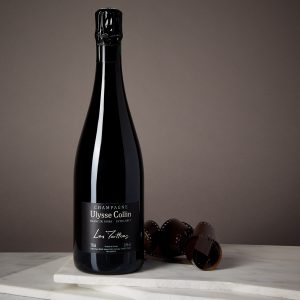 Olivier Collin’s family has owned the vineyards for generations, however, they had rented about 4.5 hectares out to a negociant in Champagne for many of those years.

Olivier decided that he could do more interesting things with the plot of land his family had rented out and decided to regain parts of the land from the negociant. In order to do so, he studied both law and winemaking and successfully brought the 4.5 hectares back into his full possession in 2003. It was in that year that the Domaine Ulysse Collin was officially founded.

Although he studied winemaking, Olivier credits Anselme Selosse, under whom he completed a three month internship, with inspiring and teaching him what he needed to know in order to make some of the finest wines coming out of the Champagne region today.

In a very short amount of time, Olivier has established a winery in one of the world’s most famous wine regions, bringing his pragmatic, non-interventionist vision to the vineyard.

Collin owns a total of about 8.5 hectares of land, including 4 hectares that he acquired in 2005. It was also in 2005 that Olivier acquired his winemaking facilities and cellars.

Almost half of the grapes grown on the property are Pinot Noir, totaling 44% of the vineyard’s output. A further 41% is Chardonnay and another 15% a Champagne blend.

Olivier Collin’s winemaking is an interesting process, which is mostly down to the fact that his winery is so young. Because he does not yet own all of the equipment he needs to work the land, he uses a mixture of organic and modern practices. He does not use herbicides or anti-rot products, instead employing the use of powdered sulfur to fight odium, as well as an organic insecticide. He also adds organic compost to the soil as needed.

Collin barrel ages his wines for 10 to 13 months, after being pressed in a 1950s Coquard press. No yeasts are added to the juices as they ferment and the wines are largely left alone during this process. The wines produced are also neither fined nor filtered before being bottled, spending a minimum of 24 months on the lees.

Every cuvee that is made is parcel specific, with the first and second pressings for each parcel vinified separately, for at least a year, before blending occurs. Wines are fermented and aged in oak barrels and each wine is Extra Brut. Extra Brut is, quite simply, very dry wine, with only 0.6% residual sugar per litre. Brut and Extra Brut are terms used within the Champagne region to describe the wines and sparkling wines that are produced in the area.

Champagne is one of France’s most recognisable wine regions, most are only aware of the world-famous sparkling wine that is produced there. Olivier Collin, however, has pulled ahead of the pack with his still, Extra Brut wines, in a very short space of time.

For you, we have chosen the Ulysse Collin “Les Maillons” Blanc de Noirs Extra Brut.