Ridge Vineyards is an American winery from California, specialized in high-end Cabernet Sauvignon, Zinfandel and Chardonnay.

Situated around 800 metres above sea level, Ridge Vineyards shot to fame in 1976 after the Judgment of Paris, where it excelled in a competition against various top Californian and French wineries.

Since then, Ridge Vineyards has become one of, if not the most, prominent American wineries, earning accolades the world over for its stunning wines.

A Taste of Ridge Vineyards 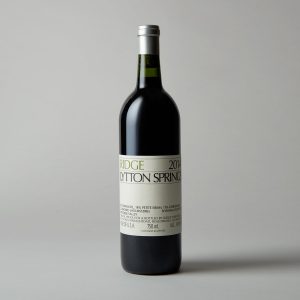 Ridge Vineyards dates back to 1885, when a San Francisco doctor named Osea Perrone bought around 73 hectares on Monte Bello Ridge. He then founded the Monte Bello Winery by terracing the slopes and planting grapevines, producing his first vintage in 1892. Nowadays, the area of the original vineyard is called the “upper vineyard, still producing quality yields.

The vineyard was sadly abandoned soon after its early promise, until a theologian named William Short bought the property in the 1940s. He replanted with Cabernet Sauvignon on an area that is now called the “middle vineyard”.

In 1959, the estate was purchased by a group of Stanford engineers called David Bennion, Charles Rose, Hewitt Crane and Howard Zeidler. They produced their first vintage in 1962.

In 1976, during a blind taste testing comparing French and California wines, called the Judgment of Paris, Ridge Vineyards received fifth place, which enhanced its reputation greatly, firmly establishing in the world of wine, something it has maintained to this day.

In 2016, Ridge Vineyards was selected as the wine to be served at the last state dinner, hosted by the Obama administration at the White House. This sort of recognition goes to show why Ridge Vineyards are consistently hailed as one of the best vineyards in America.

There are three vineyards on the Ridge Vineyards estate, Monte Bello, Lytton Springs and Geyserville, which together make up 75% of Ridge Vineyards’ output. The other 25% comes from East Bench, another estate holding, as well as 7 contracted growers.  What started out as a 73-hectare site has now grown to about 212 hectares, due to astounding management techniques and smart acquisitions.

Ridge Vineyards is situated 800 metres above sea level and 15 miles from the Pacific Ocean, making the vineyard itself quite cold, perhaps one of the coldest vineyards in the state of California.

Ridge Vineyards’ output consists of 36% Zinfandel, 23% of a Petite Sirah and Zinfandel blend, 22% of a Bordeaux blend, 7% Chardonnay, 5% Cabernet Sauvignon and 2% Merlot.

The vineyard’s output is quite large, producing around 100,000 cases of wine per vintage.

Ridge Vineyards aims to make wine in a “pre-industrial” way, as they believe that the industrial methods of winemaking cause wines to lose their character. This means that they ferment their wines with native yeasts from the vineyard, extract colour, flavour and tanning without the use of commercial enzymes and achieve clarity in the wines through settling and racking. They also believe that major winemaking decisions, such as blending, should be made on taste and not a pre-determined recipe.

If a wine is found to have excess tannin, they will fine it with egg whites, avoiding use of membrane sterile filtration during the production process.

Ridge Vineyards is particularly well known for its Monte Bello Cabernet wines. Monte Bello is aged in oak barrels made of 95% American oak and 5% French oak.

The philosophy of the vineyard as a whole is to adhere as closely as possible to the traditional methods of winemaking, while still taking advantage of some of the more modern aspects that have come into play. They aim to respect the vineyard itself and produce fine, quality wines in an environmentally respectful, socially responsible way.

Ridge Vineyards’ flagship wine, Monte Bello, is a Bordeaux blend that has the complexity of Bordeaux wines, while keeping the fruity intensity of California wines.

However for you The Beauty & The Taste have selected the 2014 Ridge Lytton Springs, a blend of Petite Sirah and Zinfandel.