Château Latour à Pomerol is a small, yet highly renowned estate in Pomerol, in the French wine region of Bordeaux. It is not to be confused with the other Bordeaux producer, Château Latour.

Widely recognised as having produced wines among the most legendary in Bordeaux’s legacy, it was particularly highly thought of during the glorious post Second World War period. 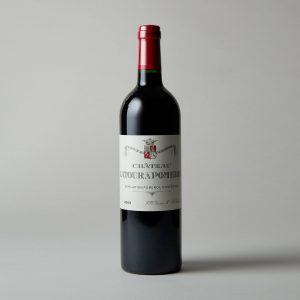 Château Latour à Pomerol’s history dates back to the mid-19th century. The ownership was held by the Chambaud family, before the heiress married Louis Garitey in 1875, to whom the estate belonged to until his death in 1914. The property was split in three parts, one of which was acquired in 1917 by Madame Loubat, who also owned the other famous Pomerol estate, Château Petrus.

She remained the sole owner of the domaine until her death in 1961, when her niece, Madame Lily Lacoste, inherited Château Latour à Pomerol, eventually donating it to the Fondation de Foyers de Charité de Châteauneuf de Galaure, in 2002.

As there is not official classification for producers in Pomerol, châteaux in the area only began developing their reputation after the Second World War. In particular, Château Latour à Pomerol had its vineyards completely devastated by frost in 1957, hence stocks had to be completely replanted. 1959 and 1961 vintages, historically known as among their best, are even more impressive considering the very young age of the vines.

Despite not owning it, from 1962 the estate was managed by Établissements Jean-Pierre Moueix, a large firm of Bordeaux negociánts who own Château Petrus.

The fame and reputation of the estate benefitted a great deal from the astonished reviews of American wine critic Robert J Parker Jr in the 1980s, especially regarding the vintage of 1982.

After several years of inconsistency, Château Latour à Pomerol set a new milestone in 2009. It is from this vintage that the domaine has regained a reputation that is second to none and a perfect representative of the glorious Pomerol.

The vineyards of Château Latour à Pomerol extend for less than 8 hectares in total. The most dominant grape is Merlot, representing over 90% of the total. The rest is planted with Cabernet Franc.

Yearly production is not massive at just the 3,000 cases mark and the domaine offers only a single wine, the Grand vin Château Latour à Pomerol. Unlike other estates, they offer no second wine for sale.

The vineyards of Château Latour à Pomerol are split in two, separate plots. The most prestigious, Les Grand Vignes, is located close to the church of Pomerol and features a gravelly soil. It also has the oldest vines. The other is on the western side of the plateau and is characterised by sandy, lighter soils.

Although covering a small surface, the vineyards represent different terroirs that have led to some degree of inconsistency in the past. However, that can equally be a source for opportunities.

To avoid the tampering of grapes, harvest is carried out by hand. Alongside this very traditional approach, the estate has gone through a series of renovations, which were first instigated in 2003. These are widely credited for the steady improvement of the wine over the last decade.

It was in 2003, in fact, that a new drainage system was introduced, allowing excess to be ferried out by wells and pumps during wet vintages. This improvement is even more significant in the Pomerol area, as it has no slopes and water cannot drain naturally.

From 2004, vinification has been performed with the usage of stainless steel tanks. Malolactic fermentation happens mostly in tanks, with a small portion of the wine going through process in wooden barrels.

Finally, in 2009 the sorting table was replaced by a new one using laser technology, an approach particularly popular in Bordeaux that is considered more efficient and less disruptive for the grapes. It is then that the grapes are then moved to thermoregulated concrete vats.

Ageing usually takes 18 months in barrels, with exposure to new French oak varying from 30% to 50%, depending on the quality of the vintages. Wines are bottled unfiltered, preserving character, flavour and aromas.

Château Latour à Pomerol wines are defined as full-bodied, meaty and concentrated. They usually require at least 10 years before being approached, to allow the essence and character of Merlot to fully open.

For you, we selected a milestone of the estate history: the 2009 Chateau Latour a Pomerol, one if the estate’s most iconic wines and seen by many as a turning point in their fortunes.