Moss Wood is a winery in the Australian region of Margaret River. The estate was the second winery established in the area, actively contributing to the development of the Margaret River wine industry.

Although specialising in reds, Moss Wood also produces some of the very few white wines in the area.

A Taste of Moss Wood Wines 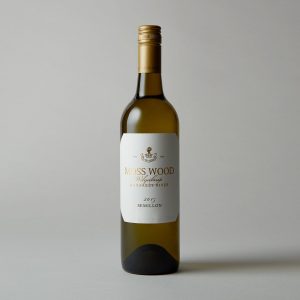 Moss Wood estate was founded in 1969 by the husband and wife team Dr Bill and Sandra Pannell, when they planted the first Cabernet Sauvignon vines. It was the beginning of a peculiar trend in Margaret River, where the first wineries were started by people without an extensive wine background, curiously enough, many of them being doctors.

Perhaps it was this reason that led Sandra to define the 1975 release, which was a major success just two years after the opening vintage, a “little miracle”. The Pannells looked after the vineyards and the winemaking themselves, pruning the vines and handpicking the grapes at harvest, sometimes at moonlight.

In 1976, Keith Mugford was appointed as the new winemaker. Keith took the job with plenty of enthusiasm, because of the challenge represented by a new estate in a new wine region, as well as the pleasure of moving to an area with some perfect spots where he could cultivate his passion for surfing.

In 1985, Keith was joined by his wife Claire to Moss Wood, as they decided to acquire the estate from the Pannells.

In 1991, Moss Wood made it to the Langton’s classification of Australian wine. Since then, the estate has been described as “exceptional” and has maintained one of the highest statuses in the region.

In 2000, the acquisition of a further vineyard in Ribbon Vale extended the total surface of planted vines in the estate portfolio. The evolution of Moss Wood was certainly favoured by the series of outstanding vintages recorded in the region more generally, from 2007 onwards.

One of the most significant milestones of this development trend occurred when, in 2017, Ray Jordan assigned an astonishing 99/100 score to Moss Wood 2014 Cabernet Sauvignon.

The specialty of Moss Wood production reflects tradition in Margaret River, with reds being quite prominent: Cabernet Sauvignon (40%), Bordeaux Blend (15%) and Pinot Noir (5%) are the most important grapes. For whites, Chardonnay, Semillon and Sauvignon Blanc are around 10% each.

Other varieties complete the picture, although the numbers are relatively insignificant.

Between 1969 and 1976, the major grape varieties were planted on the vineyards: Cabernet Sauvignon first, then Semillon and Pinot Noir, with Chardonnay as the last major grape to appear on the estate.

The Mugford family actually looked after the winemaking before taking ownership in 1985. Keith was hired in 1979 and his wife Claire joined in 1984. As the wine region itself has a very short history, techniques, such as soil management, have to be continuously reassessed by the winemaker to understand what is the best practice for getting the most out of the vines.

In the Moss Wood vineyard, soils range from sandy loam to gravelly and a red-brown loam laying over a clay subsoil. In Ribbon Vale there is a more classic gravelly loam over a clay subsoil. For both vineyards, the Mugfords apply soil conservation techniques, keeping tillage and mulching to a minimum, as well as using a healthy quantity of earth worms and soil microflora and fauna.

In order to avoid fungal diseases tampering yields, sprays are used on annually.

As Moss Wood produces different wines, there are some differences for the fermentation and ageing process. The estate ranges from steel tanks to barrels for vilification, while wines are aged from 6 to 28 months. The barrels have a 225 litres capacity and are made of French oak, with the maximum amount of exposure to new oak at 33%. This helps avoid the imparting of excessive flavours during this process.

From 2000, the estate has taken the decision of using screw cap closures for their bottles. The decision was made after observing many corks were not able to seal the wines properly, leading to the wines ageing more quickly than they should.

The flagship of the Moss Wood estate is their Cabernet Sauvignon, as per Margaret River tradition, a very bold and structured red wine. However, Moss Wood has made very noticeable whites from Chardonnay and Semillon, characterised by tropical fruits and balance.

For you, The Beauty & The Taste has selected a 2015 Moss Wood Semillon, a gem among the rare white wines of Margaret River.